Till death do us part: a conquest of love, fate and free will 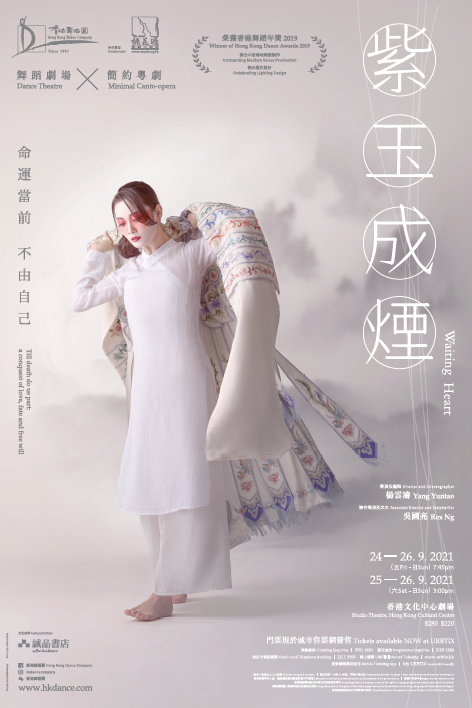 An Interdisciplinary Creative venture of Dance and Cantonese Opera

From a Tang dynasty romance and a Ming dynasty opera to the masterful Cantonese opera adaptation by Tong Tik-sang, The Legend of the Purple Hairpin and the unrelenting love of its protagonists Li Yi and Huo Xiaoyu have seen countless reiterations. In this modern-day take contemplating multiple universes, the different versions of Huo Xiaoyu are locked in a myth of destiny and self-determination. Will she accept a fate cut short? Continue to search for happiness? Or fight for what she believes in?

Waiting Hearts adapts an unconventional use of the theatre space. The multi-dimensional audience seating encompasses various perspectives. The audience may either watch from the balcony or observe the characters’ delicate movement intimately in the stalls. The unconventional stage design allows the audience to either immerse themselves in the performance as an insider, or alienate themselves from the stage as a spectator.

“The production brings together Chinese dance and Cantonese opera in this compelling re-imagining of The Legend of the Purple Hairpin, which makes inventive use of the venue to give the audience fresh perspectives and draw them into the action. Stunning designs, Yang Yuntao’s superb choreography and heartfelt performances bring out the intense emotion of this classic tale of love and devotion.”

We are nurtured in the cultural tradition of China, combining the creativity of contemporary art, to impress the world with Chinese dance of Hong Kong character.

Established in 1981, the Hong Kong Dance Company (HKDC) was incorporated in 2001 as a charitable and non-profit-making institution, and is financially supported by the Government of the Hong Kong Special Administrative Region. As one of the nine flagship performing arts companies in Hong Kong, our mission is to promote Chinese dance with contemporary artistic visions and Hong Kong character. Celebrating its 40th anniversary this year, HKDC has staged over 200 productions over the decades, many of which were highly popular with critical acclaim. Recent productions include The Legend of Mulan, Red Poppies, Spring Ritual·Eulogy, The Butterfly Lovers, Storm Clouds, L’Amour Immortel, Dream of the Past: Ancient Chinese Court Dances, Reveries of the Red Chamber, Chinese Hero: A Lone Exile, Vipassana, Lady White of West Lake, Tale of Three Cities, Waiting Heart, Liu Sanjie, Ode to the Silk Road, Dance of Strings, A Tale of the Southern Sky, Mazu the Sea Goddess, The Moon Opera, Shan Shui: An Ode To Nature, as well as Convergence, a culminating work created through a three-year interdisciplinary research study on Chinese dance and Chinese martial arts traditions.

Utopia Cantonese Opera Workshop (UCOW) was established in 1999 and later registered as a charitable organization. An art form needs young successors to build a road: at one end of this road is Bo Le, the legendary Chinese connoisseur of fine horses and at the other the legendary winged steed. In the middle is Utopia, just a humble street cleaner on the road. Utopia wishes to build a platform, holding both tradition and modernity. Our three objectives are Stage Production, Education and Promotion, and Preservation and Research. It is our aim to present this local art form to the world.

We value greatly the contribution of the late librettist Tong Tik-sang (1917 - 1959). In 2011 we realized that the best kind of tribute we could pay to him would be to continue with his mission of creative work. Thus, we wrote our first Cantonese opera,

ArenA (performed in 2011 at Kwai Tsing Theatre, and in 2015 at Shatin City Hall; our “black-box version” was presented in Seoul in 2017). Our theatrical concert His Butterflies (2014 - a performance celebrating the opening of the New Wing of Ko Shan Theatre; 2016 - a version commissioned by West Kowloon Cultural District), is unusual in that nearly fifty extracts were taken from Tong’s works, with montage working to trigger different readings and visions on the part of the audience.

For 19 years we have been engaged in cross-overs with other artists, amalgamating tradition and modernity, to present a 21st century rendition of Cantonese opera and operatic singing.