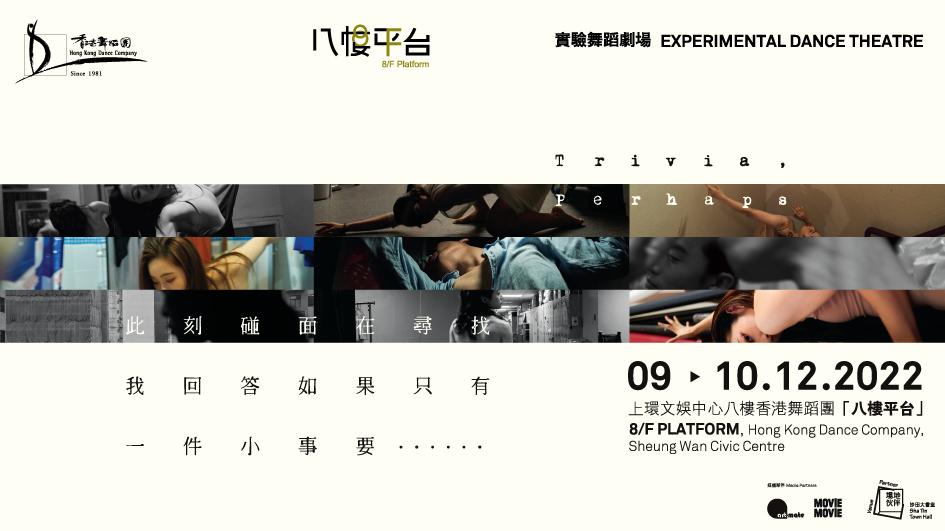 Hong Kong Dance Company will present three performances of Experimental Dance Theatre Trivia, Perhaps on 9 and 10 December 2022 at 8/F Platform, Sheung Wan Civic Centre. The cast of nine young dancers will unleash their boundless imagination to bring you a multi-faceted vision of dance.

It’s almost the end. Some people leave and some stay… When there’s no one else around, they meet on the long 8/F platform at the end of the corridor. And they dance. Leaving everything behind. That’s how it is. There’s only dance. They mean it, they want to dance. Nothing needs to be said.

As a platform for exploring and realising creative dance visions, “8/F Platform” aims to bring together audiences, dancers and artists, encourage exchange and interaction, and serve as a catalyst for creativity. Since its inception, “8/F Platform” has produced many original works with artists from different backgrounds, showcasing new possibilities and dynamics for the development of dance in contemporary society. “8/F Platform” won the Hong Kong Dance Awards 2006 for its unique concept. In 2020, Jing won the “Outstanding Small Venue Production” award in the 22nd Hong Kong Dance Awards.

Culture and artEducationLeisureMusic and Entertainment

We are nurtured in the cultural tradition of China, combined with the creativity of contemporary art, to impress the world with Chinese dance of Hong Kong character.

Established in 1981, the Hong Kong Dance Company (HKDC) was incorporated in 2001 as a charitable and non-profit-making institution, and is financially supported by the Government of the Hong Kong Special Administrative Region. As one of the nine flagship performing arts companies in Hong Kong, our mission is to promote Chinese dance with contemporary artistic visions and Hong Kong character. Since its inception, the Company has staged over 200 productions, many of which have garnered wide popular and critical acclaim. Recent productions include The Legend of Mulan, Red Poppies, Spring Ritual·Eulogy, The Butterfly Lovers, Storm Clouds, L’Amour Immortel, Dream of the Past: Ancient Chinese Court Dances, Reveries of the Red Chamber, Chinese Hero: A Lone Exile, Vipassana, Lady White of West Lake, Tale of Three Cities, Waiting Heart, Liu Sanjie, Ode to the Silk Road, Dance of Strings, A Tale of the Southern Sky, Mazu the Sea Goddess, The Moon Opera, Shan Shui: An Ode to Nature, Nine Songs, and Nezha: Untold Solitude, as well as Convergence, a culminating work created through a three-year interdisciplinary research study on Chinese dance and Chinese martial arts traditions.

As a cultural ambassador of Hong Kong, the Company tours to different cities across the globe to brings the city’s unique artistic style to the world by, engaging local audiences and encouraging cultural exchange. In recent years, we have brought our award-winning productions to the Lincoln Center in New York, Kennedy Center in Washington, D.C., Sony Centre in Toronto, the Concourse Theatre in Chatswood, Sydney, the Southbank Centre in London and The Belarusian State Academic Musical Theatre in Minsk, among others.