Connotations of Jing are of three-folds: “境” refers to one’s circumstances, boundaries and greater nature; “靜” is the inner-self tranquility; and “鏡” depicts and reveals one’s relationship with others. Yuan embraces elements of nature and expresses his hope towards life by creating a spiritual journey for the audience. Jing questions your ways of living in the hustle and bustle of the city, and explores the possibilities of dance theatre.

The 8/F Platform is HKDC’s rehearsal studio and also a dance laboratory that embraces choreography, performance, education, demonstration and multi-disciplinary collaboration, with the objectives to enhance artistic collaborations as well as audience development in Hong Kong. 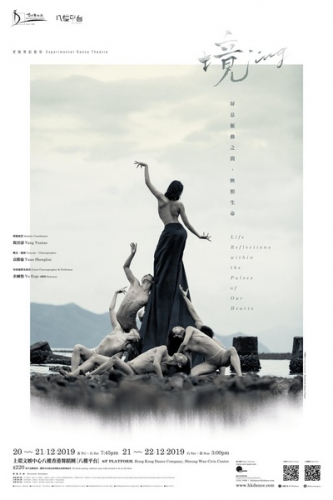 Established in 1981, the Hong Kong Dance Company (HKDC) was incorporated in 2001 as a charitable and non-profit-making institution, and is financially supported by the Government of the Hong Kong Special Administrative Region. As one of the nine flagship performing arts companies in Hong Kong, its mission is to promote Chinese dance with contemporary artistic visions and Hong Kong character. Since its inception, HKDC has staged over 100 productions, many of which were highly popular with critical acclaim. Recent productions include The Legend of Mulan, Red Poppies, Spring Ritual·Eulogy, The Butterfly Lovers, Storm Clouds, L’Amour Immortel, Dream of the Past: Ancient Chinese Court Dances, Reveries of the Red Chamber, Chinese Hero: A Lone Exile, Vipassana, Lady White of West Lake, Tale of Three Cities, Waiting Heart, Ode to the Silk Road and Dance of Strings.

As a cultural ambassador of Hong Kong, HKDC constantly brings the city’s unique artistic style to the world by touring to different cities across the globe, engaging local audiences and encouraging cultural exchange. In recent years, it has brought its award-winning productions to the Lincoln Center in New York, Kennedy Center in Washington D.C., Sony Centre in Toronto, the Concourse Theatre in Sydney, the Southbank Centre in London and the Belarusian State Academic Musical Theatre in Minsk, among others.