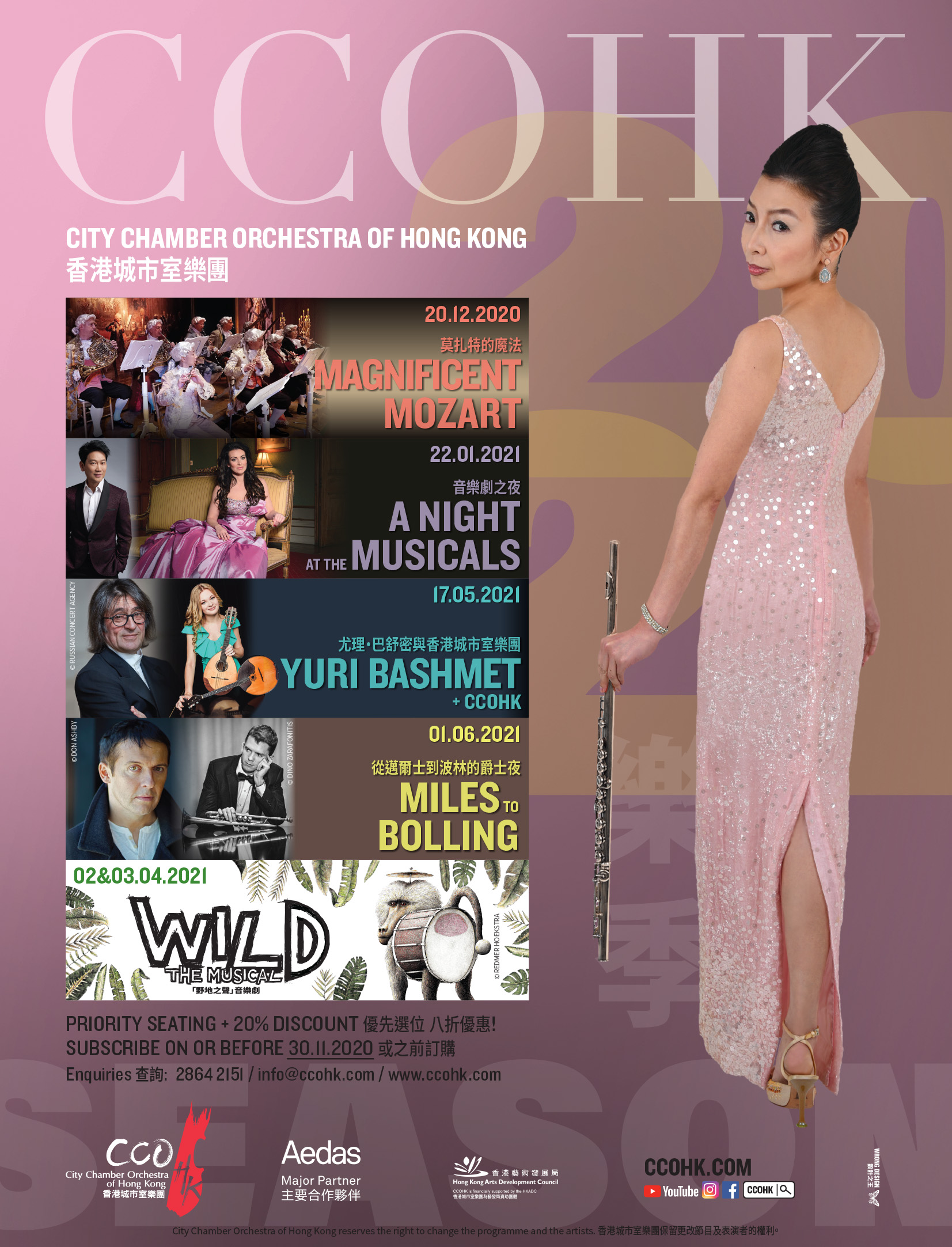 From Mozart concertos to jazz and a new musical, City Chamber Orchestra of Hong Kong’s (CCOHK) 2020/2021 season caters to all music lovers with an enticing mix of classical gems and new surprises.

The season kick starts on 20 DECEMBER 2020 with the opulence of the classical era in MAGNIFICENT MOZART. Performed with sumptuous historical costumes, Magnificent Mozart draws on animated storytelling and exhilarating music to depict the extraordinary life and career of the world’s greatest musical prodigy. Conceived, scripted and directed by Leanne Nicholls with COLIN TOUCHIN as guest conductor, Magnificent Mozart lasts just over one hour without intermission and features CCOHK in collaboration with actor JORDAN CHENG and a stunning line up of local guest artists. Musical highlights include Mozart’s thrilling Queen of the Night aria from The Magic Flute sung by soprano VALENTINA TAO and Mozart’s first ever piano piece performed by the gifted Hong Kong prodigy pianist BRANDON LAM. Leading principals of CCOHK, AMELIA CHAN on violin and ANTHONY WONG on clarinet, join Hong Kong pianist COLLEEN LEE in performing excerpts of Mozart’s most popular concertos. A feast for both the ears and the eyes is in store as local set designer ERNESTO MAURICE CORPUS prepares the stage with life-sized 18th century paintings and gorgeous golden candelabras.

Hailed by The Hull Daily Mail as “one of UK’s star vocalists”, LISA JANE KELSEY brings her top notes and sensational voice to the Hong Kong stage on 22 JANUARY 2021 with A NIGHT AT THE MUSICALS. Audiences will be treated to a show-stopping programme of popular theme songs and hits from the world’s best-loved musicals. Locally acclaimed tenor RAYMOND YOUNG co-stars in this unforgettable concert.

On 02&03 APRIL 2021, CCOHK premieres WILD, an exciting new musical with a star-studded cast of local actors, singers and dancers versatile in a range of hip-hop, cha-cha, martial arts, jazz and ballet styles. Created and scripted by Leanne Nicholls with music by BAFTA award-winning composer Nick Harvey, WILD tells the tale of two notorious animal poachers who discover a wild animal orchestra in the jungle and plot to capture the talented beasts for a lucrative show on Broadway. THE FUNKY CURRYWURST BROTHERS of STOMP fame perform as the body-percussion playing baboons. WILD is presented by CCOHK on the cusp of its award-winning Bug Symphony and is set to get everyone dancing in the aisles!

On 17 MAY 2021 CCOHK’s string section is excited to collaborate with YURI BASHMET, one of the greatest Russian music legends of all time and a viola soloist of the highest distinction. He conducts and performs viola in an exquisite evening of Russian and Italian works with Russian mandolin and domra virtuoso EKATERINA MOCHALOVA as the featured soloist.

The season concludes on 01 JUNE 2021 with an electrifying jazz-for-all programme featuring the music of jazz legends Miles Davis and Claude Bolling in an Asian premiere. Former HK Phil solo trumpeter JOSHUA MACCLUER performs Sketches of Spain, Miles Davis’ iconic work for trumpet and orchestra known for its flamenco-inspired orchestrations and trumpet and flugelhorn solos that cry the blues. Praised by The Times as “one of the most abundantly gifted of pianists,” New York-based pianist SIMON MULLIGAN joins top local jazz musicians, SYLVAIN GAGNON (bass) and NATE WONG (drums) in a performance of Claude Bolling’s Suite for Jazz Trio and Chamber Orchestra. CCOHK bristles its versatility in this exceptionally rare classical and jazz tour de force!

Throughout the 2020/2021 season CCOHK further engages the community with exciting opportunities for students to participate in masterclasses or workshops led by some of the world’s most inspiring performers and musical mentors including Yuri Bashmet and Simon Mulligan.

SEASON SUBSCRIPTIONS with a 20% discount on tickets to all events are now on sale until 30 November 2020. For more information click here to download the 2020/2021 season brochure or visit www.ccohk.com