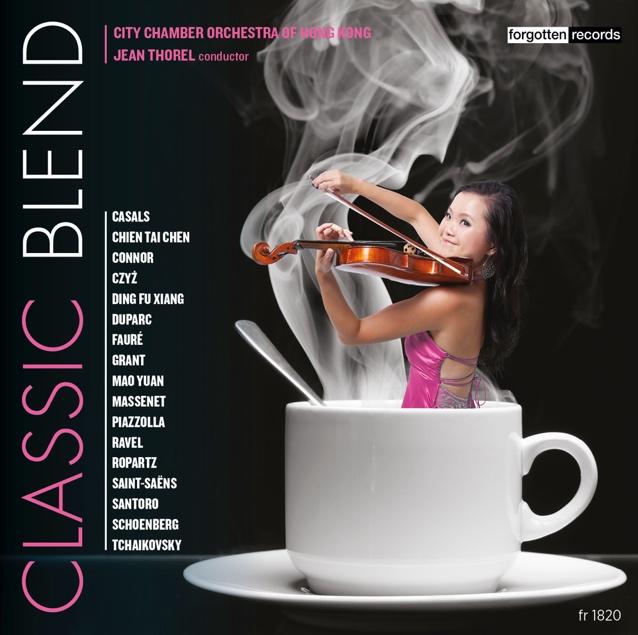 CCOHK’s penchant for niche repertoire and rare pieces as well as its unique position in the East meets West capital of Asia forms the essence of this compilation. Special musical moments during the orchestra’s era with French conductor Jean Thorel (2009 to 2017) are captured on this recording with the spotlight on long-serving principal soloists and founding members of the orchestra. These include oboist Leanne Nicholls, violinist Hong Ying Ho (CCOHK’s founding concertmaster), cellist Artem Konstantinov, violist Mike Chau, flautist Matthew Wu, hornist Joe Kirtley, clarinetist Anthony Wong and pianist Arièle Zanini. CCOHK’s special blend of East and West artistry also spills over into the eclectic selection of recorded repertoire. Leanne Nicholls, Artistic Director of CCOHK who produced the compilation and the liner notes comments, “the repertoire has been thoughtfully chosen with easy listening appeal while also presenting the listener with something surprising and new in classical music. A broad palette of musical styles is offered with one miniature after another unlocking new sound worlds, stories and soul-bearing moments.”

Classic Blend journeys to four continents with a wide range of styles. Folk-spirited Chinese pieces by highly acclaimed Chinese composers blend side by side with a Milonga, a Brazilian dance, a European waltz, and exquisite but relatively unknown pieces by famous master composers including Tchaikovsky, Saint-Saëns and Fauré. Highlights include rarely recorded French impressionistic works by Ravel, Duparc and Massenet, and dance-inspired works by Latin American composers Cláudio Santoro and Piazzolla. A Catalonian folk song forms the inspiration for Pablo Casals’ poignant encore piece Song of the Birds while the fate of two secret lovers from a Tang poem is alluded to in Chien Tai Chen’s On Foreign Lands. Another unique angle to Classic Blend’s tracklist is the inclusion of lesser-known or overshadowed works composed by major classical composers. Two works by Tchaikovsky are good examples:  the Allegro in C minor for piano solo and strings composed during Tchaikovsky’s student days under Anton Rubinstein and the Russian Dance for violin solo, strings and triangle originally conceived as a supplementary number for the composer’s favourite ballerina in Swan Lake. Ravel’s Prélude, composed as a test piece for the Paris Conservatory, has never been recorded before and is the shortest track on the CD lasting less than 2 minutes. Another surprising gem is Schoenberg’s romantic-styled Notturno which fell into obscurity after the premiere of the work in 1874. In 2009 it was rediscovered in a library in the USA under a slightly different title, and with Schoenberg’s handwritten notes on the cello part. CCOHK’s Classic Blend compilation is further augmented by several world premiere recordings. These include Bill Connor’s Dance Round the Moon with its sweeping oboe melodies dedicated in an arrangement to oboist Leanne Nicholls, Ding Fu Xiang’s Folk Dance from Northwestern China with an exhilarating virtuoso interpretation by Russian cellist Artem Konstantinov and Hong Ying Ho’s authentic interpretation of Mao Yuan’s well-known Dance of Yao People in a never-heard-before chamber orchestral arrangement.

Hailed by Classica Magazine as “pure bliss for collectors”, Forgotten Records is an acclaimed French music label specializing in the revival of rare recordings as well as recordings of forgotten repertoire in classical music. The label has also developed a recent focus on new artists. Classic Blend fits the label aptly by bringing to the limelight an upcoming but well-established orchestra performing forgotten gems by master composers. Conductor Jean Thorel comments, “I am thrilled about the release of this special CD which showcases Hong Kong as a unique crossroad of East and West music cultures. It’s also a summation of my eight fruitful years with this orchestra and the wonderful work we achieved.”