Close to Christmas on 21 December 2019 at Sha Tin Town Hall Auditorium at 2:00pm & 4:30pm, CCOHK presents The Snowman & The Bear, two magical, musical adventures based on the original stories by Raymond Briggs and set to wordless film with enchanting music by Howard Blake. Conducted by Colin Touchin, the performance features the films displayed on the big screen as CCOHK performs the orchestral score together with animated storytelling by Forrest Morr and Tania Martin and additional vocal solos by baritone Alan Tsang and tenor Justin Li.

The Snowman tells the heartwarming story of a young boy who builds a snowman one Christmas Eve which comes to life. The Snowman takes the boy on a magical journey, flying over snow-capped mountains to the famous song Walking in the Air, to be sung by Poon Tsz-pok, Jensen (age 12)from Diocesan Boys’ School (2:00pm performance) and Yeung Sin-hang, Anderson (age 11)from Victoria Shanghai Academy (4:30pm performance).

The Bear tells the tale of a young girl named Tilly who visits the zoo and accidentally drops her teddy bear into the polar bear’s pit. That night she awakens to find a huge polar bear in her bedroom who returns her beloved teddy bear and then takes her on a fantastical bear-ride through the crisp Christmastime night to the beautiful theme song Somewhere a Star Shines performed by Felicity Low (age 12)from Chinese International School (2:00pm performance) and Windy Zhan (age 13) from International Christian Quality Music Secondary School (4:30pm performance).

Narrated in English and lasting 80 minutes with a 15-minute interval, The Snowman & The Bear programme is a wonderful wintertime outing for all the family and suitable for children aged three and above. Children below this age will not be admitted. Tickets priced at $400, $300, $250, $150* (*seats with restricted view, only available at URBTIX) with half-price concessions for full-time students, senior citizens, people with disabilities and minder, and Comprehensive Social Security Assistance recipients, are available from all URBTIX outlets. For ticketing enquiries, call 3761 6661; for credit card telephone booking, call 2111 5999; for internet booking, visit www.urbtix.hk; for programme or other enquiries, call 2864 2156 or visit www.ccohk.com.

For MEDIA ENQUIRIES please contact Mr. Jonathan Tsang at 2864 2151 or via email jonathan.ccohk@gmail.com 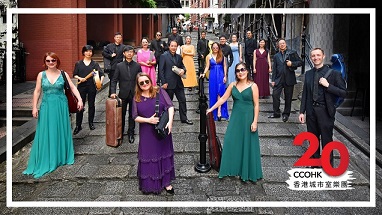