The Capital of Metal campaign sets out to determine which Finnish city deserves to be known internationally as the Capital of Metal. It also spotlights Finland’s position at the centre of the global heavy metal community: Finland has more metal bands per capita than any other country.

The Ministry for Foreign Affairs of Finland, Tuska Open Air Metal Festival, Sony Music Finland and ten Finnish cities are teaming up to figure out which city is the Capital of Metal. The campaign gets under way today at www.capitalofmetal.fi, where Finnish metal bands can add their info to a map of Finland and help their hometowns compete for the title. The winner will be the city with the most metal bands per capita. The deadline for the entries is 20 June, and the winner will be announced on 21 June. The winning city will also be showcased at Helsinki’s Tuska Festival, organised 29 June to 1 July.

Fans of Finnish heavy metal around the world can participate by “liking” their favourite bands on the Capital of Metal website. The site also offers a chance to buy T-shirts with city names printed as metal-style logos. Participating bands and fans can enter a draw for record shop gift certificates, and two lucky fans will win trips for two to Tuska Festival, including travel, lodging and VIP access.

The idea for Capital of Metal got started when Tuska Festival director Eeka Mäkynen met with Tomi Saarinen and Tuomo Saikkonen of Sony Music Finland to discuss the progress of Finnish metal music. Finland rose to international acclaim as a metal stronghold in the late 1990s with the popularity of HIM, Nightwish and Children of Bodom, and the country’s reputation continues to stand out as we approach 2020.

“Finnish bands are constantly touring the world, their recordings regularly reach Gold status, and metal festivals are filled with music-loving fans,” says Saikkonen, who is also known as the guitarist of the band Mokoma and the managing director of Sakara Records. “We decided that it was time for Finnish metal culture to sing its own praises, and to be loud about it.”

“In addition to Finland having more than 50 metal bands for every 100,000 people, metal music enjoys a unique position as part of popular culture in Finland. It’s worth mentioning the prevalent community spirit that exists among metal fans here. For example, last summer at Tuska Festival, the police didn’t have to deal with a single disturbance.”

Capital of Metal is backed by numerous Finnish businesses and organisations involved in the heavy music scene: Radio Rock, Record Shop X, Musamaailma instrument and gear shop, and Inferno magazine. Finnish metal personalities make appearances in Capital of Metal videos about the competing cities. In eight minidocumentaries, guitarist and singer Antti Hyyrynen of the band Stam1na travels around Finland talking with local metal celebrities in order to get to the heart of each town’s metal scene. The city videos and other Capital of Metal videos are available on the Capital of Metal website.

The Unit for Public Diplomacy at the Ministry for Foreign Affairs of Finland sees Capital of Metal as a way to support and show respect for the work that Finnish metal bands do. “Metal bands are very significant ambassadors for Finland,” says Petra Theman, director of the Unit for Public Diplomacy. “We know of numerous examples of people who have become fascinated with Finland or come to Finland to study because of an interest that began with metal music.”

“First impressions of a country usually come from culture or sports, and for a long time Finland’s most significant conduit has been heavy metal music.”

For further info and interview requests:

Photo (attachment) by Jesse Kämäräinen, a shot from Tuska festival. 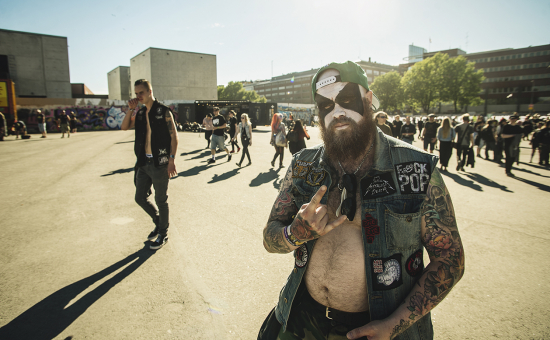 Consulate General promotes Finnish interests in Hong Kong and Macao by catalyzing cooperation of relevant actors and by communicating the strenghts of Finnish society, economy and culture.