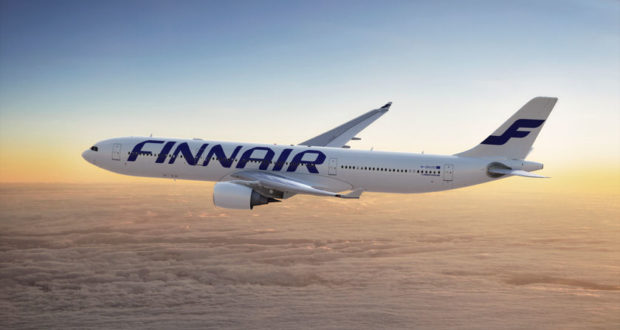 Finnair has announced that it will fly the first biofuel flights backed by its “Push for change” carbon decreasing initiative this week.

The first Finnair flight to be flown with a biofuel mix of 12 percent departed San Francisco Airport for Helsinki, Finland on August 5th, with the next one due to depart on August 7th. The use of biofuel reduces the total C02 emissions for the two flights by approximately 32 tons.

“The launch of our Push for Change initiative was an important step for Finnair in order to provide our customers with the opportunity to conveniently offset or decrease the emissions from their travel,” says Arja Suominen, SVP, Communications & Corporate Responsibility at Finnair. “We have been pleased with the early phases of the initiative so far and we are now excited to move forward and fly our two first biofuel flights supported entirely by the Push for change contributions. We naturally hope that customers will be increasingly willing and interested in using the service in the future as well.”

Finnair’s biofuels partners in San Francisco are SkyNRG and World Energy; Shell Aviation has provided logistics and supply chain support for the project. The sustainable biofuel is produced from used cooking oil in California, which does not compete with food production or the agriculture industry.

Additional information on Finnair’s Push for Change initiative, including the options to purchase biofuel for future flights as well as the offsetting of carbon emissions through certified projects, can be found on Finnair.com’s Push for change site.

Finnair flies between Asia, Europe and North America with an emphasis on fast connections via Helsinki, carrying more than twelve million passengers annually. Finnair's extensive network connects 19 cities in Asia and 8 cities in North America with over 100 destinations in Europe. The airline, a pioneer in sustainable flying, was the first European airline to fly the next-generation, eco-smart Airbus A350 XWB aircraft and it is the first airline listed in the Leadership Index of the worldwide Carbon Disclosure Project. The only Nordic carrier with a 4-star Skytrax ranking, Finnair has also won the World Airline Award for Best Airline Northern Europe for the past nine years running. Finnair is a member of oneworld, the alliance of the world's leading airlines committed to providing the highest level of service and convenience to frequent international travellers.