Winter Magic with The Snowman & The Bear (with Film) 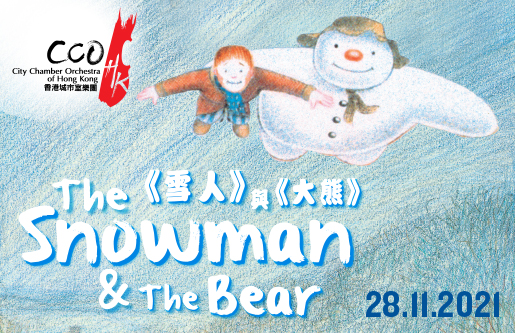 On 28 November 2021 at Hong Kong City Hall Concert Hall at 4:30pm & 7:30pm, CCOHK heralds the winter season with its popular family programme The Snowman & The Bear (with film). These two animated films, both heartwarming and magical, are based on the stories by Raymond Briggs. CCOHK will feature the film displayed on the big screen with lively storytelling by Australian actor Michael Sharmon and Filipina actress Crisel Consunji who won Best New Performer at the 38th Hong Kong Film Awards in 2019 for her role as Evelyn in the Hong Kong film Still Human.

The Snowman tells the heart-warming story of a young boy who builds a snowman one Christmas Eve which comes to life and takes him on a magical journey. The boy and the Snowman fly over snow-capped mountains to the well-known tune of Walking in the Air, to be sung by Chow Shek-ning (aged 12) from Carmel Secondary School (4:30pm performance) and Samuel Poon (aged 11) from Diocesan Boys’ School Primary Division (7:30pm performance).

The Bear tells the tale of a young girl named Tilly who visits the zoo and accidentally drops her teddy bear into the polar bear’s pit. That night she awakens to find a huge polar bear standing in her bedroom. The polar bear returns her beloved teddy bear and then takes her on a fantastical bear-ride through the crisp wintertime night. The beautiful theme song, Somewhere a Star Shines, will be performed by Alyssa Jiang (aged 11) from Singapore International School (Hong Kong) (4:30pm performance) and Hailey Tsang (aged 14) from Good Hope School (7:30pm performance).

Narrated in English and lasting 80 minutes with a 15-minute interval, The Snowman & The Bear programme with film is suitable for children aged three and above. Tickets priced at $450, $350, $250, with half-price concessions for full-time students, senior citizens, people with disabilities and minder, and Comprehensive Social Security Assistance recipients, are available from all URBTIX outlets. For ticketing enquiries, call 3761 6661; for credit card telephone booking, call 2111 5999; for internet booking, visit www.urbtix.hk; for programme or other enquiries, call 2864 2156 or visit www.ccohk.com.

Crisel Consunji is an award-winning actress and an accomplished musical theatre performer. She received a nomination for Best Actress and Best New Performer at the 38th Hong Kong Film Awards and won Best New Performer for her acclaimed portrayal in the film “Still Human”. She began her professional career in theatre from the age of ten performing with the Repertory Philippines in Manila. Her roles include Beauty in Beauty and the Beast, Susan Pevensie in The Lion, the Witch and the Wardrobe and Little Red Riding Hood in Into the Woods. She is a recipient of the prestigious Ani ng Dangal Award from the National Commission on Culture and the Arts (NCCA) in the Philippines. In 2008 she moved to Hong Kong to work at Hong Kong Disneyland. Her performances included the lead role of Bebe in The Golden Mickeys. In recent years Crisel Consunji has also committed herself to early childhood education with a focus on arts-based learning for young children. She is the founder of Baumhaus, an arts education initiative and creative space for families which provides nurturing and support with a variety of educational and community programmes. She also leads the distribution and training for the US-based Kindermusik programme in Hong Kong which empowers families to raise their children with a love of music. Crisel Consunji has completed two master's degrees in Early Childhood Education and Global Politics.

Born in Australia, Michael Sharmon has worked in television, film and theatre as an actor, director, composer and playwright. On stage he has performed the roles of Malvolio in Twelfth Night, Javert in Les Misérables and Hamlet, in the Shakespeare classic. His work in television includes the role of Johann Sebastian Bach in Bach-All About the Music and an appearance in the ﬁlm Nim’s Island starring Jodie Foster. Michael Sharmon is one of the founders of Golden Voice Entertainment which produced an award-winning Podcast Musical Story Time in 2021. He has also written and acted in several shows for The Absolutely Fabulous Theatre Connection (AFTEC), and was thrilled to be selected as AFTEC’s emerging Director in 2016. As part of this experience he travelled to the UK in 2016 to further his studies in directing at the London Academy of Music and Dramatic Art. In Hong Kong his directing credits include Jane Eyre, Auditions (which he also toured to the Edinburgh Festival Fringe) and a recent production of his own original musical Arabian Dreams with the City Chamber Orchestra of Hong Kong for the 2021 International Arts Festival. In 2021 Michael Sharmon will make his appearance in the role of Jacob Marley in A Christmas Carol for Sweet and Sour Productions. This is his second time narrating The Snowman & The Bear for City Chamber Orchestra of Hong Kong since 2018. 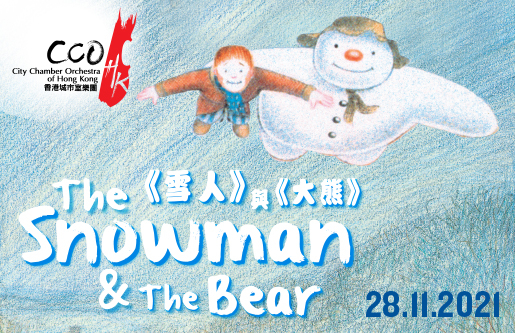 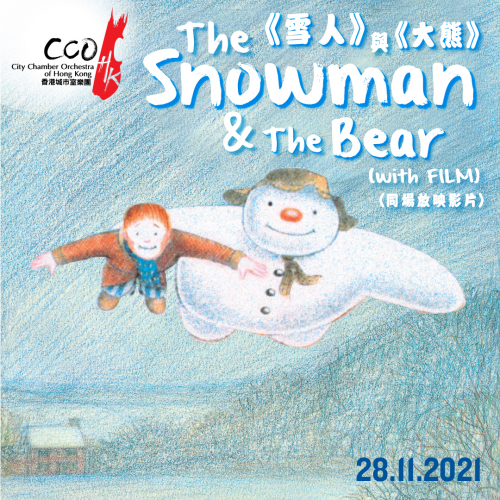 City Chamber Orchestra of Hong Kong (CCOHK) holds a unique position as one of Asia’s leading chamber orchestras. Members are professional musicians experienced in playing diverse styles ranging from Baroque and classical to East-West crossover, tango, bollywood and jazz. Since its establishment in 1999 CCOHK has performed with many world-class artists including Sir James Galway, Dame Evelyn Glennie, Dame Emma Kirkby, Sir Thomas Allen, Sir Neville Marriner, Michala Petri, Christian Lindberg, Sarah Chang, Philippe Entremont, Julian Lloyd Webber, Edgar Meyer, Branford Marsalis, Richard Galliano and The Vienna Boys’ Choir. On tour CCOHK has been invited to perform in Italy, Taipei, Beijing, Chengdu and at the 20th China Shanghai International Arts Festival. At home CCOHK is in high demand with performing engagements for Hong Kong Ballet, Le French May Arts Festival, RTHK Radio 4, the World Harp Congress and The Hong Kong International Piano Competition. Recordings include four internationally acclaimed releases on the NAXOS, Orchid Classics, Forgotten Records and OUR Recordings labels. CCOHK’s mission to cultivate young audiences for music in Hong Kong has led to the creation of several original and fully-staged productions incorporating actors. These include Magnificent Mozart, The Star Bach, Vivaldi Unmasked and Bug Symphony which won the Public Choice Award at the YAMawards in Portugal 2017. At the helm of CCOHK’s artistic and executive planning is CCOHK’s founder Leanne Nicholls, herself a prize-winning performer who was awarded a commendation certificate from the Home Affairs Bureau of the Hong Kong SAR Government in 2009. French conductor Jean Thorel served as chief conductor from 2008 to 2016 and was succeeded by the Armenian conductor and pianist Vahan Mardirossian in 2019.